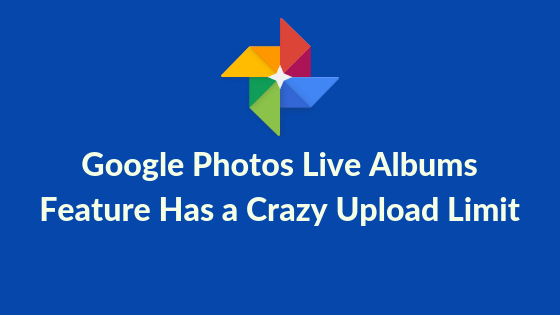 Also Read
You may dont know what limit is in Google Photos, and you found that the photos stop uploading to the cloud, Actually ,what is happening?

Google Photos has made life much easier when organizing and backing up our photos. In fact, this process is already so simplified that it is easy to forget that it is happening in the background.

Just by taking a picture with our mobile, Google Photos will automatically upload it to the cloud and catalog it into an album; Then we can find our photos by several factors, such as the date or place where they were taken. If you like to take pictures for anything you do, it is one of the best services.

Photos are not automatically uploaded to Google Photos, what happens?


However, it is precisely if you are constantly taking pictures that you may encounter a problem; one that will not affect most people, but is important despite everything: the photos stop uploading to Google Photos.

In effect, we take photos, but the album stops updating and receiving new images. Which is a problem, especially if you are in the middle of a special moment or a session; the photos may be kept on your device, but you will lose backup copies and additional features of Google Photos.

More people have suffered this problem than it seems. And in all cases, the problem comes when you upload 10,000 photos. Yes, it seems high enough that we do not have to worry, but think about it better; If each photo you make is automatically uploaded to the cloud, it is very likely that you will reach that figure very soon.

What is the limit in Google Photos


Finally, the official Google Photos account has confirmed what was suspected: there is a limit to the number of photos we can upload to Google Photos. That limit is 10,000 photographs or videos in private albums; When we reach that limit, we stop uploading photos until we delete some of the album.

Keep in mind that the limit is higher in shared albums: 20,000 photos or videos. Therefore, you may want to create a shared album as a precaution; this way you will have more space and it will take twice as long to reach the limit.

Of course, the reason is the logical one: space is not free, and Google Photos has already done enough free storage for our photos. But maybe there could be another alternative, such as deciding the type of photos we want to upload.

Now we know there is limit in google photos, The live Albums are not being updated after 10000 photos , So there is no new albums, you must clear some old photos to get your new photos updated in Live Album feature,

I hope this Article may informative for you, If you have any doubs please qoute it in comment section

A professional content writer and tech savy. He love to explore new stuff and explain it in a simple way. No matter what and how complicated it is

Disclaimer: This post may contain affiliate links that earn me a small commission, at no additional cost to you. I only recommend products I personally use and love, or think my readers will find useful.
Read other related articles
trending