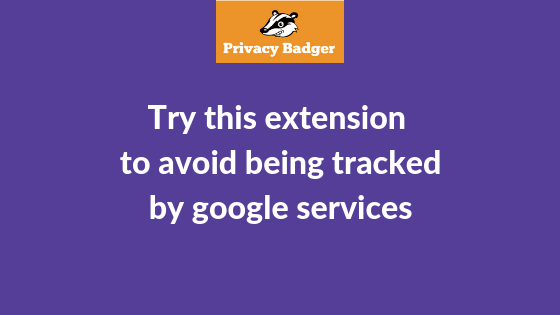 Privacy Badger | Privacy is an aspect that worries Internet users a lot. We have seen that in recent times it has been news that popular services track users. Luckily we can almost always take steps to avoid it. Either through the configuration of those same services. Also even using specific software for it. Today we are going to talk about Privacy Badger, a browser extension that has just launched a new version and that protects users from tracking Google services.

It has just been presented by the Electronic Frontier Foundation, the organization behind this extension. Its objective is to offer users greater protection against scanning in those browsers where it is compatible.

It should be mentioned that a few months ago, in May, they launched an update to avoid tracking Facebook links. Now he has done something similar, but this time for Google services. We already know that this company has different platforms that are widely used in the day to day of Internet users.

Of course, we must bear in mind that at the moment it is an initial version and does not cover all these services. At the moment it acts in the searches of Google, Google Hangouts and Google Docs. As we can see, it does not act on other widely used ones such as Gmail or even Google Plus. Of course, in the future could also avoid monitoring in these services.

We already know that the search giant uses methods to track users through its services. But in the end, everything will also depend on the software that the user uses. There are tools, such as Privacy Badger, which can prevent this.

Different formulas to carry out the follow-up

An example may be users who use Chrome as a browser and perform a search on Google, send information about clicks on search results. It offers information to the company to, in some way, improves the service. However, users may not want to offer that information.

In Hangouts and Docs, Google also uses a method to track clicks made by users, as well as the context in which they are located.

In short, Privacy Badger has been updated with a new version to deal with the tracking of some Google services. As we mentioned, at the moment it does not offer that protection in some like Gmail or Google Plus. However, it is more than likely that they will incorporate it in a future update.

Privacy Badger is available for Google Chrome, which is the browser most used today by users on different platforms. We can also find it for other browsers such as Mozilla Firefox

Privacy is a fundamental aspect for Internet users. Luckily we can find tools like the one mentioned in this article to avoid it. In a previous article, we talked about some keys to find out if we maintain privacy and security when surfing the net. We gave some tips to achieve it.
online privacy security - October 09, 2018

A professional content writer and tech savy. He love to explore new stuff and explain it in a simple way. No matter what and how complicated it is

Disclaimer: This post may contain affiliate links that earn me a small commission, at no additional cost to you. I only recommend products I personally use and love, or think my readers will find useful.
Read other related articles
security